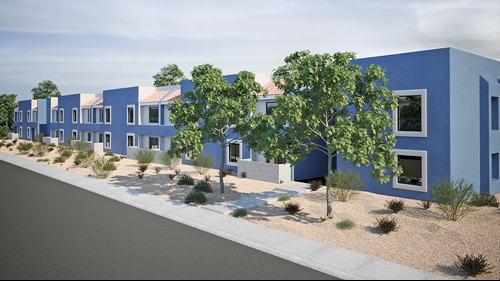 PHOENIX – One of the largest crowdfunding companies in the nation, Neighborhood Ventures, has announced the sale of one of its investment properties, Venture on 19th (4313 N 19th Avenue, Phoenix, AZ 85015). The 41-unit apartment building, consisting of one-bedroom, one-bath units closed this week for a purchase price of $6.76 million at $165K per unit and was sold to an Arizona-based buyer in an off-market transaction. Each of the 154 Arizona-based investors received a 12% preferred annual return on their investment.

Venture on 19th is located in a scenic Midtown Phoenix neighborhood just steps away from the hustle and bustle of the city streets and near the Arizona Grand Canalscape, a water-front recreational area with trails for biking and walking. Upon purchase of the property in May 2020, the complex was in good condition, so rather than a complete renovation, the Neighborhood Ventures team focused on adding value through enhanced landscaping, expanded patios for select units, and updated amenities such as new hardware and updated appliances.

“I was thrilled to have found this property when we did and in the condition that it was in,” says Neighborhood Ventures Co-founder, John Kobierowski. “In only one-and-a-half years, we were able to bring the building to life with simple but thoughtful aesthetic improvements and amenity upgrades that are valuable to current and future residents.”

Venture on 19th is the seventh real estate crowdfunded investment property to be offered by Neighborhood Ventures, and the fifth property to be sold by the company. Investors funded a total of $1.4 million toward the purchase of the property and because it was fully leased at the time, Neighborhood Ventures has been paying investors 6% in annual cash distributions since the property was attained. With this sale, investors will now receive their principal investment and the remainder of their 12% annual preferred return.

“This was such a unique opportunity for our team and for our investors,” says Neighborhood Ventures Co-founder and CEO, Jamison Manwaring. “With many projects, it can take up to a year before investors see distributions, so it was very exciting to provide them with an opportunity where they could see a cash return right away.”

Neighborhood Ventures offers investment opportunities to individuals of all income levels, with a minimum investment amount of just $1,000. Since inception, the company has sponsored more equity crowdfunding offerings than any other real estate investment company nationwide. To date, the group has purchased 13 properties and sold five of them, paying investors a 12% preferred annual return on their investments. Find the latest information on investment opportunities and progress updates on all projects at neighborhood.ventures.

Housing Market In 2023: Correction, Normalization, Or A Crash?

My View: What investors should know about the Valley Multifamily market in 2023