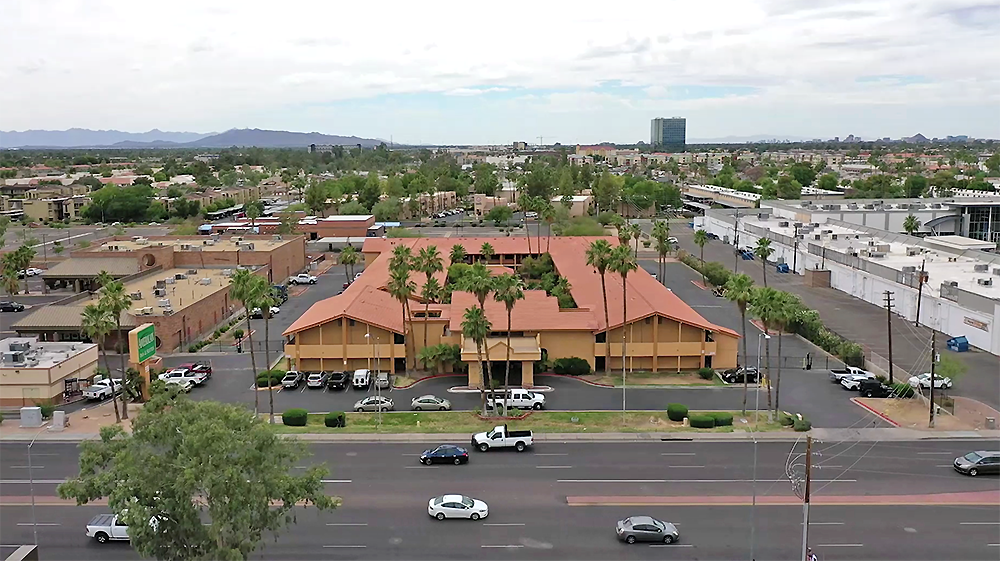 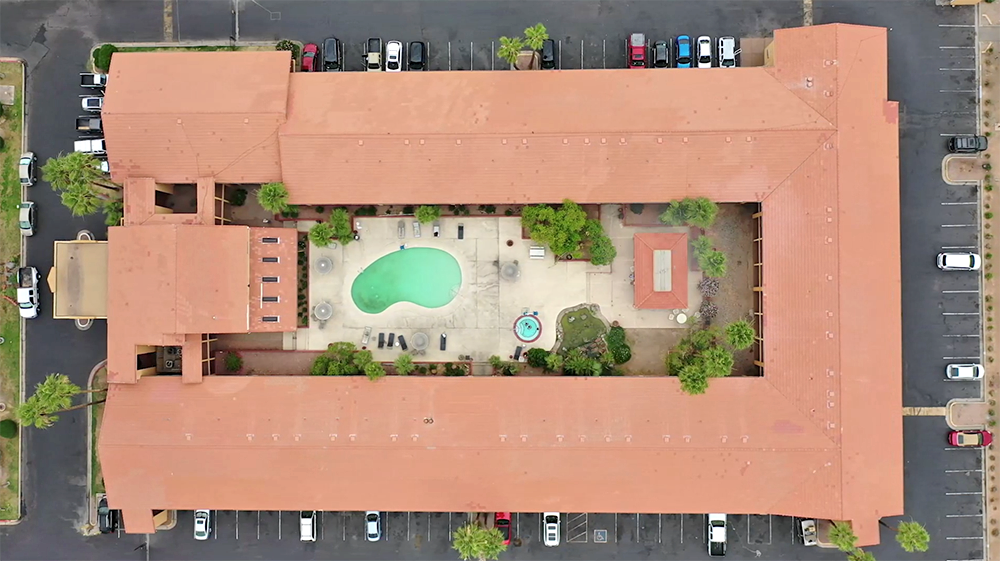 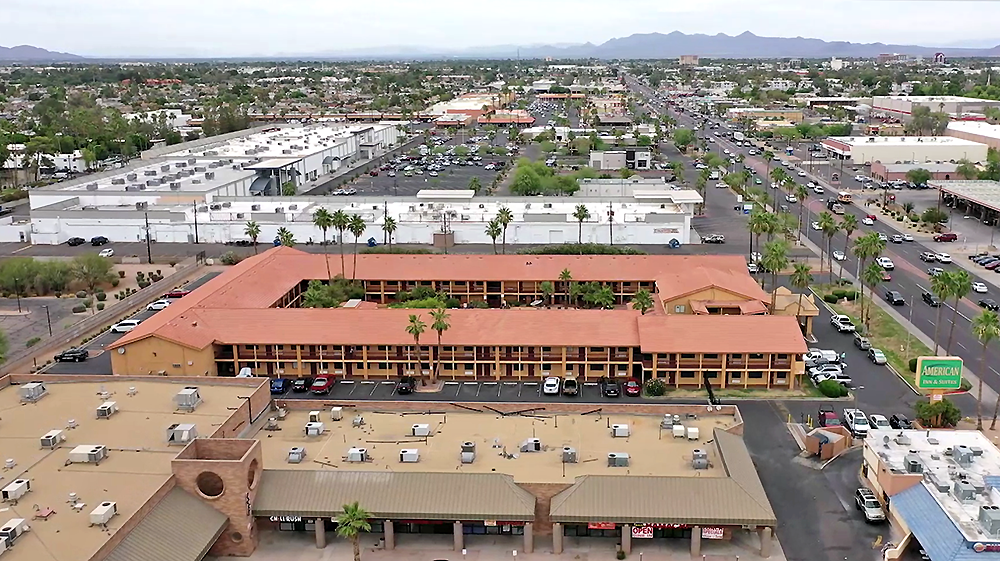 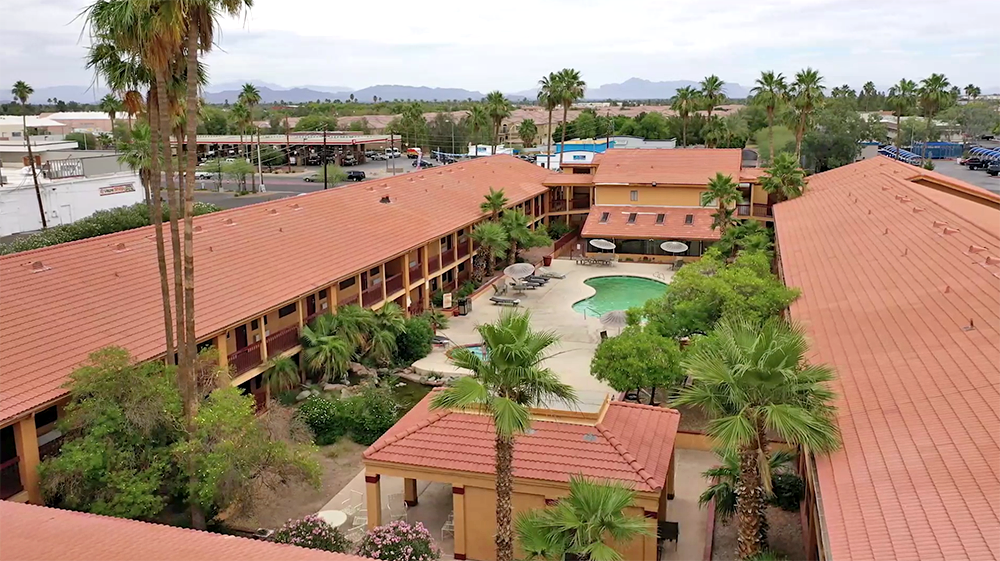 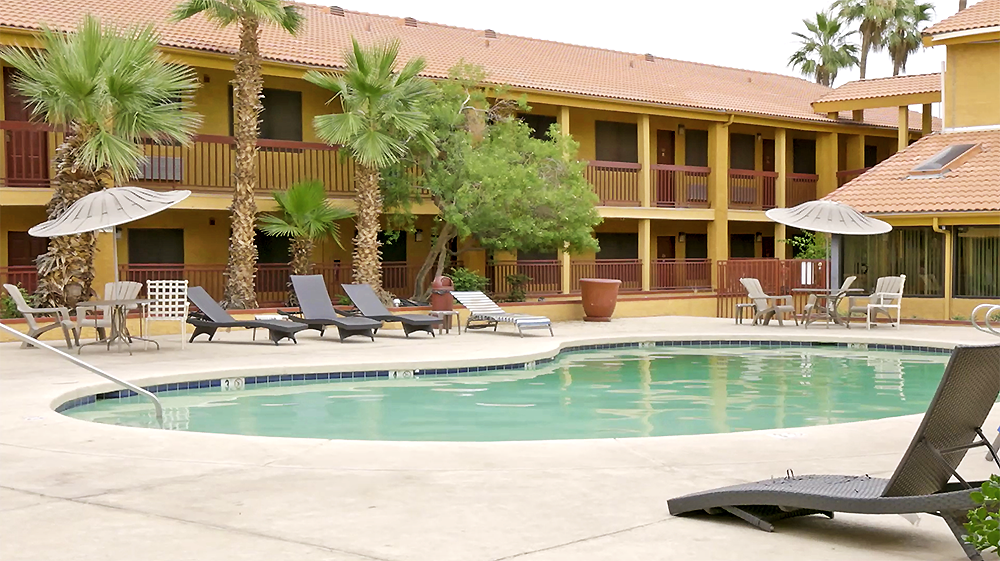 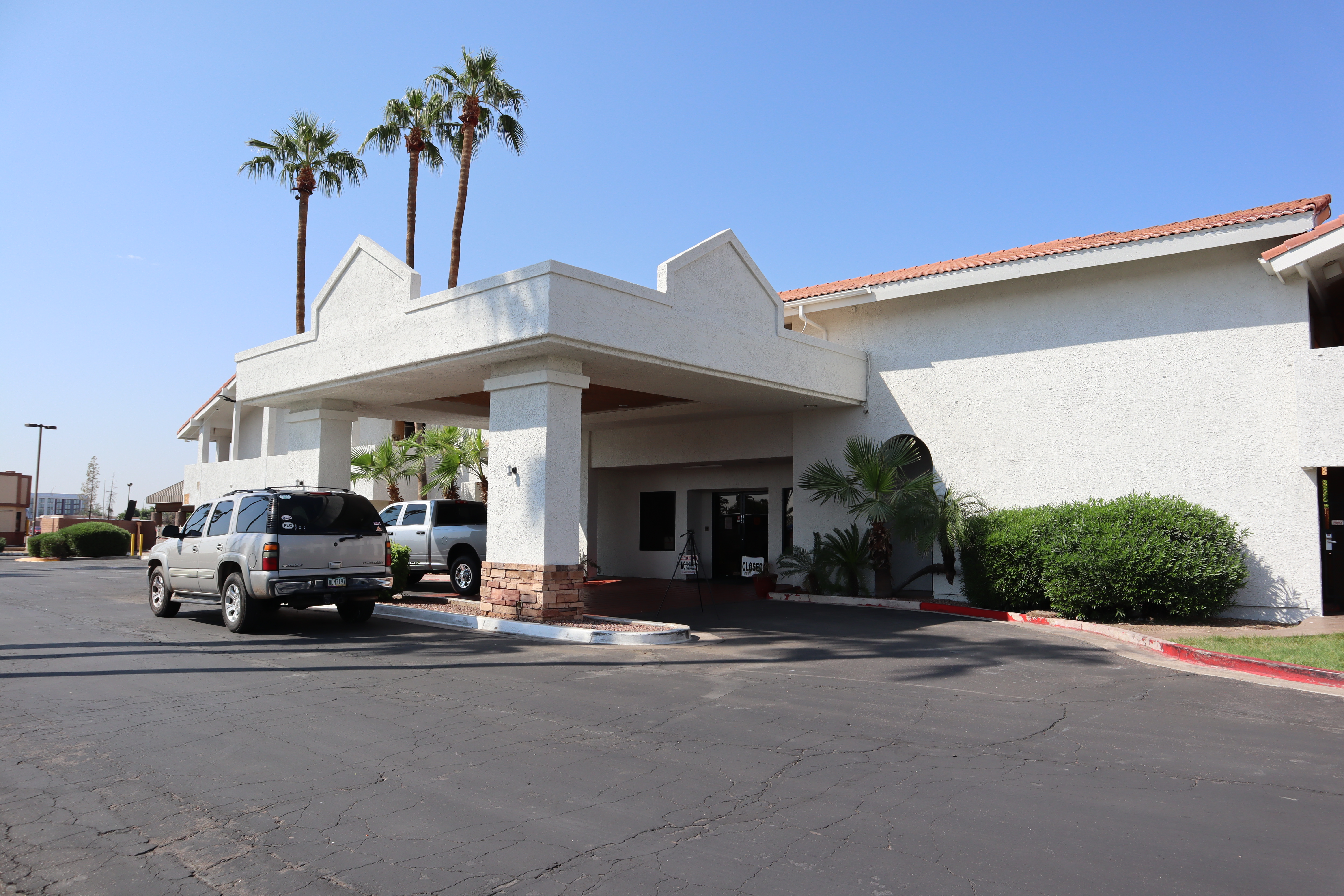 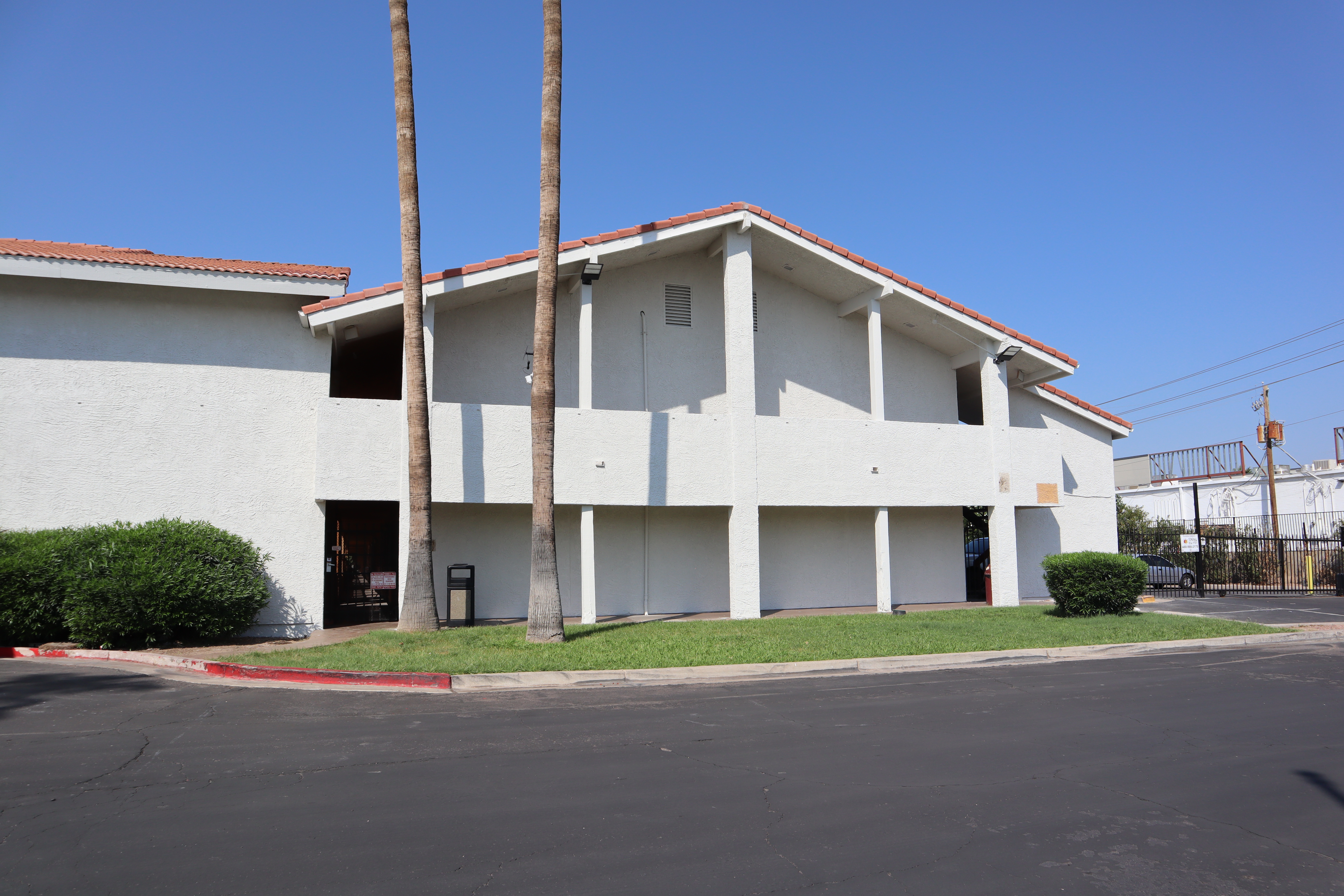 Venture on Country Club plans to purchase a 120-unit hotel located at 1410 S Country Club, Mesa, Arizona 85210 and convert it into a multi-family residential apartment building.

The property was originally built in 1985 and consists of 120 units - 35 studio units, 73 one-bedroom and one-bathroom units, and 12 two-bedroom and two-bathroom units. It is currently being operated as a hotel, but our plan is to convert it into a traditional multi-unit rental building. Zoning approval is required for this conversion and is expected to take about 12 months to obtain.

While the approval process is underway, we plan to first renovate the existing units in anticipation of the conversion, and then rent them as short-term stay AirBNB style units. Renovations will begin as soon as the Property is acquired and should be completed within four months. Once entitlements are approved, the Property will be leased up as a traditional multi-unit apartment. We expect the Property to be fully leased and stabilized approximately six months after entitlements are approved.

It is anticipated that the property will either be sold or refinanced after a three-year period. 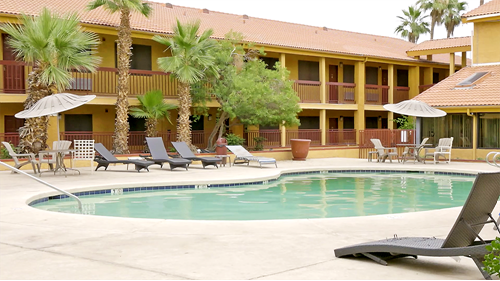 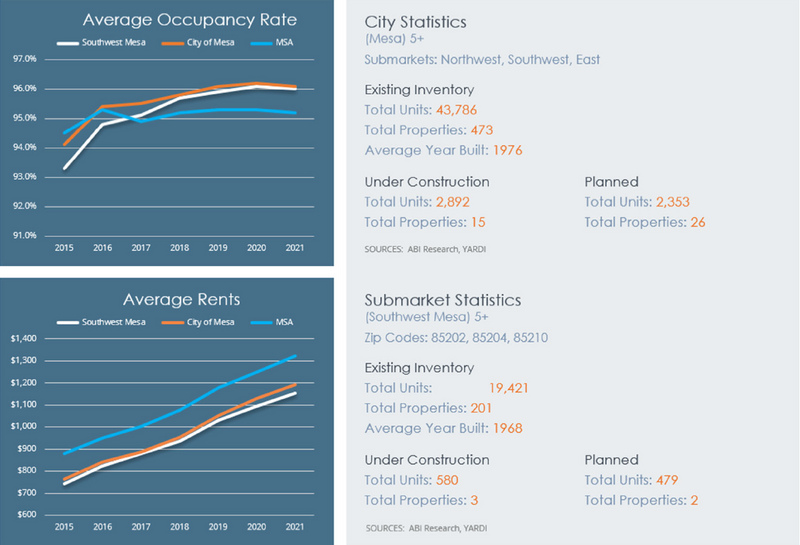 It is anticipated that the property will either be sold or refinanced after a three-year period. The renovation of the unit will bring them up to market value. The current market monthly rents for  comparable units in this area are as follows:

After renovations are completed, the Company expects to achieve the following rents:

For a growing MSA, much like the Phoenix MSA, a general rule-of-thumb is that occupancy should trend between 94 to 96% for equilibrium.

Average occupancy for both the submarket and neighborhood/zip code has been trending in the 95% range for the last several years.

With little in the construction pipeline, and the area’s continued population growth, occupancy rates should increase with rental rates correspondingly rising in both the near-to-mid term. 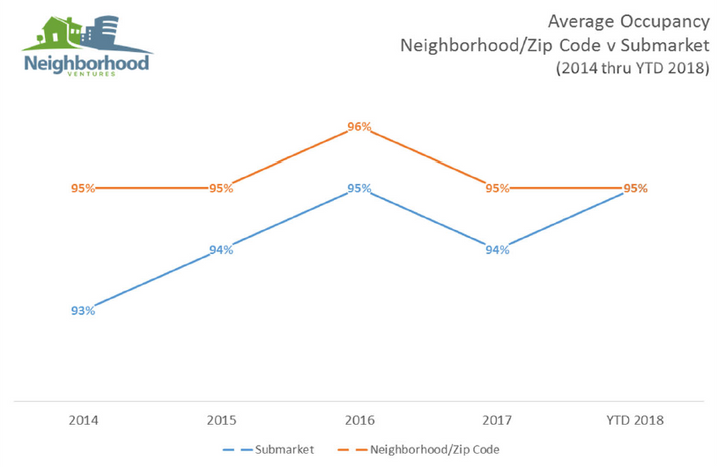 Venture on Country Club is located in the Southwest Mesa Submarket. 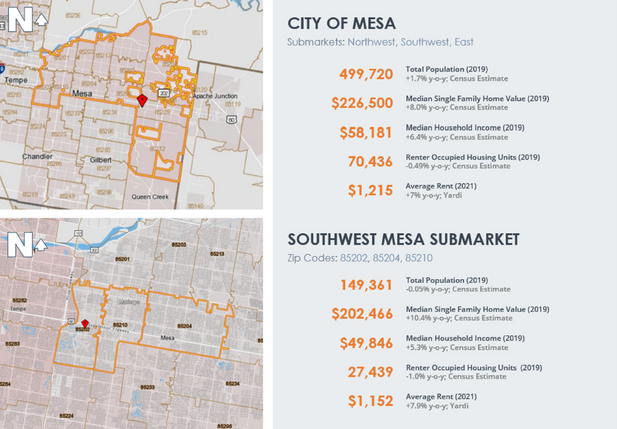 The following is a breakdown of $5M+ project counts, and estimated total and average development valuations, by ZIP code (as of April 2021): 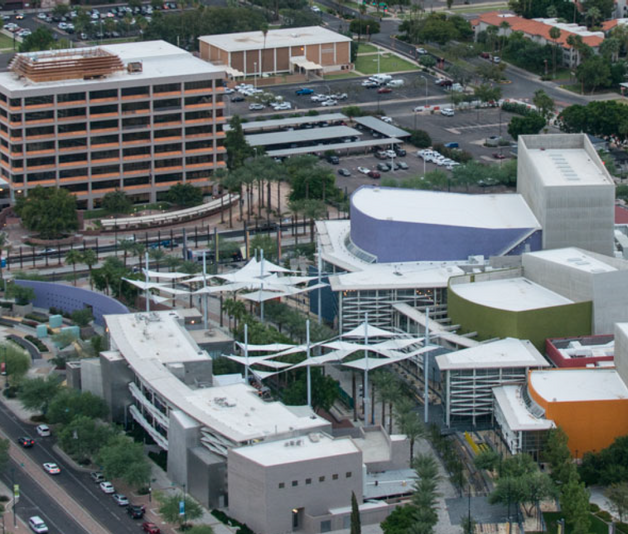 Located in the heart of the City, Downtown Mesa offers a wealth of opportunities for business owners, consumers, and art enthusiasts alike. In addition to offering a pedestrian-friendly atmosphere, Downtown Mesa is host to many high-profile events.

Downtown Mesa is fast becoming the hub of activities for this prospering region. Downtown's cultural anchor, the renowned Mesa Arts Center draws over 387,000 patrons to events in its facilities annually. Downtown Mesa has 7,000 employees, 3,000 residents, and more than 11,000 daily visitors who come to shop, play, learn, and conduct business.

Businesses established in Downtown Mesa are strategically located to take advantage of a large workforce that is accessible by three integrated freeways: the Superstition (US 60), Price (101), and Red Mountain (202), as well as, the first extension of Phoenix Metro Light Rail at Sycamore & Main Street. When considering the total business activity, Downtown Mesa is a 2 billion dollar square mile business district. 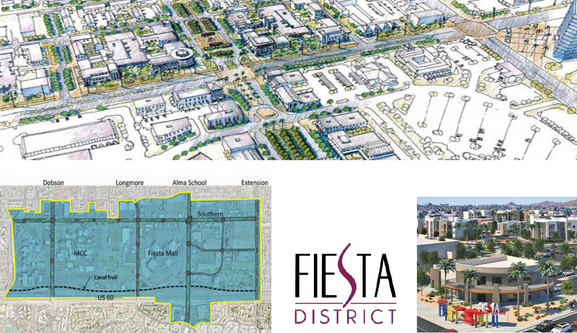 Over the last several years, the area has seen or is in the midst of more than $519 million of redevelopment efforts. With new Class A office space coming online and strategic redevelopment and adaptive-reuse opportunities available, the district is ripe for business locations and expansion.

The City of Mesa has invested more than $12 million dollars into the Southern Avenue Streetscape Program to define the Fiesta District as a uniquely identifiable area that is an economically vibrant, pedestrian-friendly, active urban destination.

A portion of the Fiesta District has been designated as both a redevelopment area and an opportunity zone, opening it up for new tax relief programs that will continue to aid its economic revitalization. 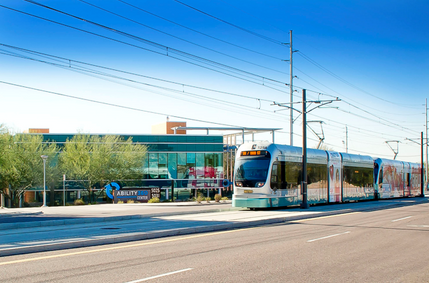 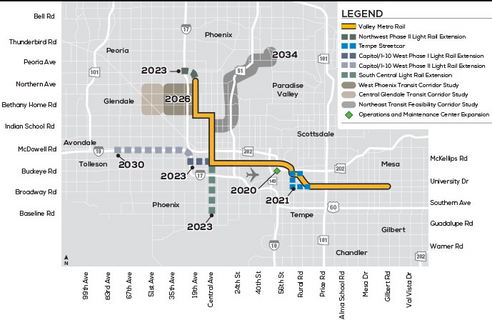 Valley Metro Rail is a public, nonprofit regional organization with five-member cities – Phoenix, Tempe, Mesa, Glendale and Chandler. It is responsible for the development and operation of the region’s high-capacity transit system.

As one of the country’s fastest-growing metropolitan areas, the Valley of the Sun has a critical need for an expanded transit network. An additional 40 miles is in various phases of planning, design, or construction. Light rail serves as an important link between communities. Thousands of riders use it to connect to work, school, and entertainment. It stimulates economic growth and revitalization for the region. The future of transit in the Valley is the future of the Valley itself.

The Phoenix economy suffered a relatively mild downturn during the COVID 19 induced recession during the first half of 2020 and is already in recovery, adding back almost 80% of jobs lost by November 2020.

Nevertheless, the metro’s recovery will slow during Q1 2021 due to rising COVID-19 cases and a softening U.S. economy.

The multifamily sector has been remarkably resilient in the face of the pandemic supported, in part, by ongoing migration to the metro. Over 76,000 residents flocked to Phoenix in 2020, on par with 2019’s 78,000 new residents. As a result, not only does the average vacancy rate remain low by historic standards at just 4.8% as of Q3 2020, but the average rate has returned to pre-pandemic levels already. Further, overall, rents have bounced back in the metro with an average quarterly rent growth of an about +1.25% in Q3 2020. Even so, certain submarkets which are more densely populated and have seen strong growth in new supply over the past few years such as Central Phoenix, North Tempe, and Scottsdale and have seen vacancy rates increase and rents continue to decline as residents choose to live in less populous West and East Valley locations where rents are cheaper, and it is easier to be socially distant.

Phoenix has much lower business and living costs than neighboring California. Longer-term, this is expected to keep attracting businesses and residents to the area. In fact, 3 out of the top 5 metros from which residents relocated in 2020 were in California. The arbitrage has also benefited the well-paying high-tech sector in Phoenix dubbed the Silicon Desert. It now accounts for about 5.4% of employment, +0.4% above the national average.

Phoenix has a favorable demographic profile for multifamily rentals, with Millennials making up about 21 percent of the population. More importantly, this cohort is expected to grow faster than the national average over the next five years. Helping to keep the metro young is Arizona State University, which had over 125,000 students enrolled for fall 2020 with about 75,000 indicating they would live in Phoenix.

The metro’s economy has transitioned over the past 20 years to include higher-paying sectors, such as professional services, education, and financial activities. Phoenix is a now a financial center with about 9% of jobs in this sector compared to 6% nationally, in addition to having 17% of jobs in the well-paying professional services sector compared to about 14% nationally. As a bonus, these jobs can also be done remotely.

With the COVID 19 vaccine starting to be administered, the economy is likely to rebound strongly in the latter part of 2021 as more and more residents are vaccinated. Longer-term, Phoenix is likely to remain one of the strongest economies in the country due to a warm climate and relatively low business and living costs. This and the vast amount of available land should continue to attract both employers and population long-term. As a result, the Phoenix economy should continue to outperform the national economy over the long run.

Due in large part to the climate, tourism is one of Phoenix's top industries. Roughly 43 million people fly through Sky Harbor Airport each year, making the Valley of the Sun the starting point for many travelers' Arizona vacations and providing a need for workers in the leisure and hospitality sectors.

Phoenix is also developing into a technology hub, with many web-based companies like GoDaddy and InfusionSoft finding a home here. Residents also find work in the financial services industries, with Wells Fargo, Bank of America, American Express, and JPMorgan Chase & Co. employing large numbers of locals.

The unemployment rate in Phoenix is slightly below the national average.

Unemployment Rate this Year- 4.1% of people are without a job.

Does it say its a Reg-A investment? Do you have to be accredited investor?

I'm interested. What interest do I earn on this product? You say Preferred 12%. What is the LTV?

Correct, this project offers a 12% preferred annual return. With an early 6% preferred return beginning in December. Generally the LTV is between 55% and 65%. But this percentage is fluid because as we renovate the value of the property is increasing.

What does a 3-year Target?

A 3 year target is how long we expect to keep the property before either selling or refinancing.

What is the minimum that you need to raise to make Country Club viable? I see that you ahve only raised 60%. Is that enough to move the project forward. If you don't raise enough do you refund any investments?

Do you have to license or certified to invest?

How do I verify that I have a Custodial Account set up? I looked all over the website and was unable to identify if I have one setup or not.

Is this an annually return if successful?

This property offers a 12% preferred annual return, with an early 6% annual return expected in December 2021.

When you sell a property, do we as investors get any of the profit?

After we sell or refinance a property our investors should expect to receive the remainder of the 12% annual return owed plus the amount of their original investment. Please copy this link to learn more: https://neighborhood.ventures/how-investors-get-paid/.

Will Neighborhood Ventures Fund be investing in this project, or is it accessible only via the crowdfunding route?

The Fund will be investing in Venture on Country Club, but investors are able to invest directly in the project as well.

For the country club property in Mesa how does that investment return work? Is it a yearly payout or a monthly payout?

Distributions are typically paid quarterly. But our investors also have the option to set up a Custodial Account and receive their distributions monthly. We pay investors a 12% return per year over the life of the project and our target hold period for Venture on Country Club is three years. This project offers investors an early 6% cash flow expected to begin in Dec 2021 and then final distributions are made when the building is sold or refinanced

Nonaccredited investors can invest up to $10,000 in each project.

Don't see your question? Send us a message.